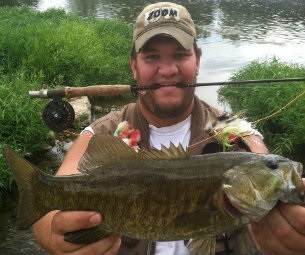 John Satkowski resides in Toledo, Ohio, where he fishes for all fish that swim in the rivers and lakes of southeastern Michigan and northwest Ohio. An artist, fly tying demonstrator, and fly tying instructor, John shares his love of fly tying and fishing as often as he can. For the last fifteen years, he has focused on unlocking the secrets of smallmouth bass, carp, trout, and northern pike on the fly, chasing after them in the rivers and lakes of the Wolverine state and the glory waters of Montana. John is also an accomplished realistic tier and always tries to add a little realistic flare to his patterns. Johnï¿½s patterns often use creative fly materials and unconventional tying styles.