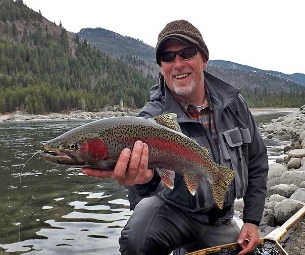 Jack Mitchell is the head guide/owner of The Evening Hatch featuring 10 Great Rivers, 3 Cool Lodges & 1 Little Guide Shack. He started fishing at the early age of two and pretty much has not stopped since. His fishing trails have led him to Alaska, Canada, Idaho, Montana, Wyoming, Washington, Oregon and South America. In the 90's he explored/guided many watersheds in Chile that until a few years ago had hardly ever been fished. The Evening Hatch started as a small dream in 1988 and since the company has grown from a small red pick-up, an Achilles raft and doing a seasonal 30 trips a year, to a year round operation facilitating over 900 guided river days a year. Our services range from day trips to all inclusive programs featuring our very own post and beam lodges in two locations and our 'Heart and Soul' waters include the Yakima, Klickitat, Methow, Upper Columbia and Olympic Peninsula. His favorite fishing is a greased line for steelhead with a two hander. He started the credited fly fishing class at CWU in 1994. The class is still ongoing and very popular. He has spoken on the topic of fly fishing at sport shows, clubs and seminars. The company's goal has always been to have a great time on the water, and give back to the watersheds in some way or another.