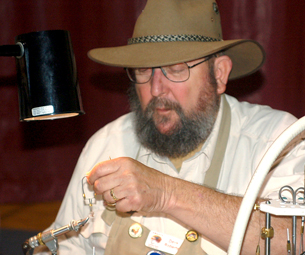 Roberts is a fly tyer of the old-school variety; he began tying at the age of 5 under his grandfather’s (an Irish champion fly caster and fly tyer) direction, where he was made to tie tails on a hook over and over until he got it right — before he was allowed to move onto tying dry fly bodies. That was many years ago and he’s been tying flies for 50+ years. I enjoy tying everything from midges and Catskill dries to full dress Classic Atlantic Salmon flies. He is an avid fly angler and recently named ‘Oregon Fly Tyer of the Year’. He guides on the upper Rogue river and is known to be a bamboo rod fanatic. He is a member of the Federation of Fly Fishers, belongs to three fly tying groups and is a Demonstration Tyer at many fly fishing and tying trade shows. When not fishing or guiding, I tie between 4 & 9 hours per day.