5 Tips for Successful Trophy Trout Hunting
by THE FLY DUDES 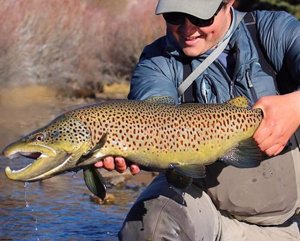 Trophy trout hunting has, undoubtedly, gained notoriety in fly fishing because of social media. Everybody wants to have a rad picture shared across the socialsphere, including our ugly mugs. There is, however, a certain work ethic that aids in catching trophy fish. Here is, what we have found it takes to catch the “Fish of a lifetime.”

1. Be prepared to not catch a damn thing.

This is the hardest thing about trophy trout hunting. When you are getting skunked, knowing that you can put a size 22 pheasant tail, catch a bunch of 10”-20” fish, and call it a successful day, is a very real temptation. At least you didn’t get skunked right? Wrong. THIS THOUGHT PROCESS IS A TRAP. You may not catch a fish that day, but that is totally fine. The thing about big fish is the fact that they are big for a reason. They could feed only at night, in serious low pressure systems, or several different situations that they feel the most comfortable in. It is all about being in the right place at the right time, and the only way to catch those conditions consistently, is to understand when they are feeding, and put in the work. 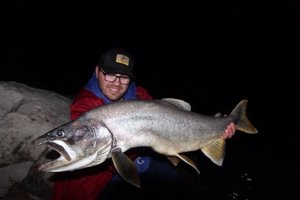 The internet is our best friend. We can find out information on food source, habitat, flows, and targetable species in a matter of minutes. Do your research and you will be greatly rewarded. There are criteria that most trophy trout fisheries meet on a consistent basis. A healthy zooplankton presence, which supports growth for small fish, followed by larger target insects, and then finally, baitfish/fingerling and smaller game fish. Doing a little research on a system will help you decide if it is worth the time exploring and fishing hard.

As awesome as it would be to live in New Zealand or fish the White River all the time for massive browns, most rivers just don’t have the sustenance to support decent populations of large fish. So, there are two methods to find big fish near, one of which may not be popular among some anglers. First, you can fish lakes. Spending time on still-waters can yield some of the largest fish anywhere, i.e.; Pyramid Lake (Reno, Nevada), Strobel Lake (Argentina), or Lake Thingvallavtn (Iceland). Next, and the somewhat controversial answer, is to fish to pre-spawn fish that are moving out of lakes, and the ocean. Now in my honest opinion, if the regulations put in place by fish and game are met, fish to the fish you want. If you aren’t a biologist, don’t tell people they are decimating fisheries by fishing for fish moving up to spawn. And if you think swinging a fly to a steelhead is any different than catching a fish on an egg, from an ethical standpoint, and wanna fight me about it, catch me outside. How bou dat? The biggest fish around you live in lakes. And the best time to catch them on the fly is when they move into rivers and are aggressively eating everything around them. 90 percent of the big fish we catch are pre-spawn, but they are all handled properly, and released to continue populating our rivers and lakes. Let’s hope I don’t get lynched for admitting what almost every trophy trout fisherman does. 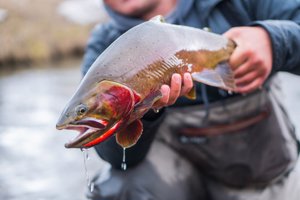 Most big fish, whether pre-spawn or not, are extremely territorial. Therefore, whether actively feeding or not, a lot of the time, you can trigger a strike fishing big streamers. Big browns will often attack smaller fish that come near there zone strictly out of aggression, not hunger. Hence why the well known streamer guys, Galloup, Schmidt, and Strolis design flies that push water because the fish pick up that vibration with their lateral line, which can cause a strike.

If your biggest goal in life is to catch a 30” brown, you need to be night fishing. These fish get huge because the moment the sun goes down, they start hunting. Big browns are known for being big nocturnal eaters, so why would you not be fishing to them when they’re eating? Sleep is overrated anyways. In lakes, big fish come into shore to feed on baitfish and small trout, rodents, and frogs. We have even watched as a baby duckling is picked off by a large brown right behind his mother. Nature is rad and brutal at the same time. Same goes for rivers. When the light fades, the big fish move out from the undercut banks to begin hunting. Night fishing is a must for trophy fish!

In brief overview, be prepared to get skunked, fish big flies at night, and know the times that the big boys are moving out of the lakes. All of the information you can find on the internet is useless until you sack up and work for those big fish. You may not catch many, but it’s hard to beat working your ass off for a fish of a lifetime.

Kyle Jensen has been "trying" to fly fish since he was about 3 or 4. Spending his summers on the South Fork of the Snake, he grew up a trout snob. During his teenage years he experimented with different species and found himself hooked on carp. A few of Kyle's passions include fly fishing (Obviously), hitting the long ball on the golf course, and long romantic walks on the carp flats.

You can check out more about ’THE FLY DUDES’ and their adventures at www.theflydudes.com.