I began fishing for steelhead as a teenager in Minnesota and Wisconsin, hiking the banks of Lake Superior tributaries with some friends who were good enough to show me the way. In those early years, the normal way to fish for steelhead with flies was drift fishing, or “chuck-and-duck”. We used 9-foot, 7 or 8 weight rods, and a fly reel loaded with backing, and about 150 yards of 8# Maxima. We would just clamp a couple of split shot on the line about 2 feet above a yarn fly (yarn snelled to a #6 Mustad 9523 hook). We just stripped line off the reel, lifted the shot out of the water, and chucked it out into the river. The key was to use just the right amount of weight to tick the bottom of the run, rod high, without hanging up or stopping the drift. Fishing by feel was a great way to learn the water, and was an exciting way to hook a fish. Or a stick. Or a log. Or a boulder. The nylon mono was thin enough to get down fast, and stay there. This technique works well on inside seams, fast pocket water, and nice runs on small to mid-sized rivers. The limitations of this method are slow water, and wide rivers. However, it works well in the brush and tree-lined streams of the western Great Lakes. Most of my early steelhead successes (and failures) were achieved while using this rig. Substituting a floating running line for the mono is a good improvement, as the running line is more visible, and can be mended. You become skilled at feeling the difference between a rock, a stick, or a fish with this tight-line technique. I remember being very surprised when I hooked my first steelhead, after setting the hook into only rocks and logs for many outings. The bright fish seemed to run in several directions at the same time, and jumped, too! I was hooked! 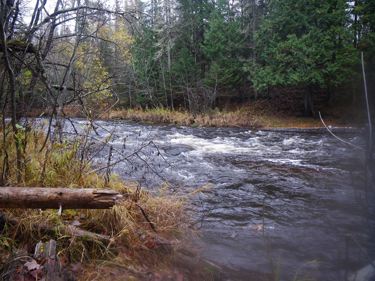 Although drift fishing is still done today, it is no longer the most popular way to fish with flies in the rivers of Minnesota, Wisconsin, and Michigan. These days, we’ve seen a steady increase in the number of fly anglers fishing with weight-forward floating lines, strike indicators, and nymphs. This is due to 2 factors, I believe. First, most trout anglers are already familiar with indicator nymphing, and, second, because it works!

Indicator nymphing has become the most popular way to fly fish for steelhead in the western Great Lakes. Single-handed fly rods from 9-10’ long, in a 7 or 8-weight, are very popular in our narrower rivers. A typical nymph rig would be something like this… A 7.5’ or 9’ tapered leader around 1X or 2X, then a split shot clamped above the tippet knot, usually 2’ to 3’ of 2X fluorocarbon, tied to a stonefly nymph. Many anglers like to then drop an egg pattern back from the hook of the nymph, about 24”. Popular nymphs include #6 or 8 Epoxyback Black Stones (rubberlegs), Epoxyback PT’s, etc. Glo bugs in sizes 6-10 in a variety of colors will finish it off. Most of the casts are up-and-across, trying to achieve a natural dead-drift along the bottom of a deep seam, or through a run. Roll-casts are the norm. The indicator is usually about 6-7 feet above the split shot. Remember, when that indicator hesitates, dives, or twitches, SET THE HOOK!

Shorter 2-handed rods (sometimes called “switch”rods) around 10’6” to 12’ long, 6-8 weight, are also gaining in popularity, both for nymphing and swinging streamers. These longer rods make it easier to deliver a bulky nymph rig to the target, and once a few casts are learned, are a great tool for bigger rivers. 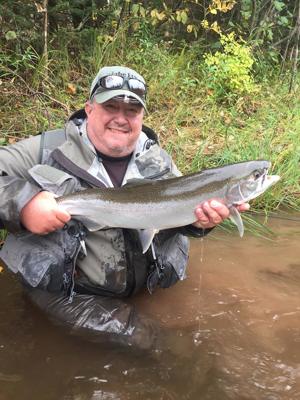 Swinging flies for steelhead is also becoming more popular in our region. This is probably the coolest way to hook a steelhead, other than skating or dead-drifting dry flies! While single-handed rods work well for swinging streamers in smaller streams, Switch rods and spey rods are awesome for the bigger rivers. The best times to swing flies here are in late spring, and early fall. Warmer water temps, combined with the natural migration of fish during these times, can be the magic combo for swinging flies! Sink tips (10-15’, type 6) seem to be about right for much of our water. This is a great way to cover water, and have some fun casting!

Some of the steelhead rivers of this region contain self-sustaining runs of naturally reproducing fish. Other rivers rely on hatcheries to maintain a viable fishery, as the water may get too warm for young trout and salmon to survive. Some of the original stocking of steelhead took place in the late 1800’s, and many rivers now have their own naturalized strains of steelhead. No, they don’t migrate to saltwater like their western relatives, but they sure look and feel like west coast steelhead when you hook a good one! Some of our rivers only take spring runs, but many rivers offer fall-run fish in good numbers. These fish winter over in the river, and spend more time in the river than they do in the lake! Great lakes steelhead behave more like west coast steelhead when they first enter the river, and are aggressive towards flies. These chrome fish are incredibly strong, fast, and beautiful. After these steelhead have been in the river for a while, they begin to behave like smart, old resident trout. They become leader shy in low, clear water conditions, and seem to favor smaller nymphs and egg patterns. This is why the indicator/nymph rigs work so well.

As steelheading becomes more popular, the rivers get more crowded. River etiquette seems to be lost (or maybe was never learned) by many steelheaders, old and young. Respecting other angler’s space, and picking up trash you find along the river are a good start. Respect the environment, people, and fish you encounter. If you do, you will be rewarded sooner with a hot chromie burning line off your reel!

Whichever method you decide to try, pay close attention to your fly location and speed. Set the hook every time you even think a fish MIGHT have taken your fly. Fish hard, and take some time to look around…. You’re on steelhead water! Good luck!

Scott Struif is the manager of The Fly Angler in Blaine, MN. He grew up fishing for bass, muskies, and steelhead in Minnesota and Wisconsin. He spent better than 10 seasons guiding fly fishermen at Bristol Bay Lodge in Alaska, and one season guiding in Mongolia. Scott has hosted saltwater trips to Florida, The Bahamas, and Christmas Island. He currently spends lots of time fishing poppers for big smallmouth bass on his home water, the Upper Mississippi River in Minnesota. He fishes Montana every year, as well as midwestern streams for trout. His steelhead experience includes British Columbia, Alaska, and the western Great Lakes tributaries.