The Creation of FrankenFrog
by Paul J. Beel 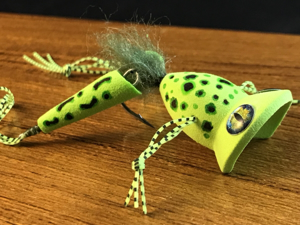 One of the primary reasons you might design a fly is to solve a particular problem. Many times, as a fly designer, there are various products that may give you an idea for a fly that you may not have thought of otherwise.

Through the years I have tried many times to design a frog fly. I was really trying to solve a problem which is to have a top water fly that resembled a frog, so bass would go crazy over it. I never was happy with what I designed for this type of fly or it didn't swim or pop to my liking. Eventually I abandoned the thought of designing a frog and any time I wanted to fish this type of fly, I would just throw a larger popper.

That was until I was staring at a pile of various Rainy's poppers I had lying on the kitchen table. There were 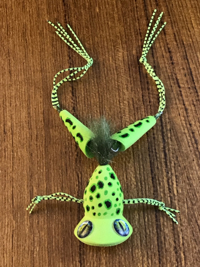 many shapes and colors and I thought it would be fun to throw together some kind of funky popper. I wasn't even thinking about a frog at this point. I began placing them next to each other, cutting the fronts or backs off, and generally thinking about different ways I could tie things together.

Then as I place some pieces together, a frog started to take shape, but I was still fighting the thought, because I had never been happy with this type of fly in the past. But it really started to fall in place and as I kept thinking about how to tie the fly together, I clarified in my mind how each section might work.

The basis for my FrankenFrog centered around two Rainy's pencil poppers and a Rainy's PSP Popper/Diver. The pencil poppers made terrific looking frog thighs and the PSP Popper/Diver would form the body and head. The other parts I wanted to make as simple as possible, so I could duplicate this fly over and over without it taking forever to tie. So for the rest of the back legs and complete front legs, I used an old tried and true way of forming legs...tying rubber legs in knots. Then I just clipped them to shape. 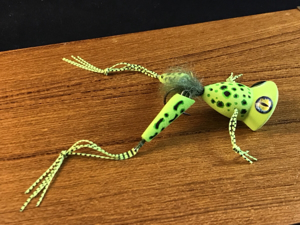 It wasn't finished yet. The most important part was still to come...testing. In my local pond, the fish have already started to move deep and we've had some cold spells of late, but at least I would see how it would swim. With some lead added to the bend of the hook, it landed on the water's surface perfectly every time I cast out. The pop from the Rainy's PSP Popper/Diver was awesome! You can't get a better pop out of a popper, I guarantee it. The movement of the legs were just icing on the cake. The FrankenFrog was born! It's alive, alive!

I am finally happy with a frog I designed and I am ecstatic about the way it turned out. I can't wait to throw it to bass next spring. It just goes to show you, no matter how hard you try, you just might need the right products on hand to finally design the fly you are completely happy with.

Paul J. Beel is owner and fly tier of the website and fly tying business, FrankenFly at http://www.frankenfly.com.
He pursued his passion of fishing after watching his grandfather create homemade lures as a kid. He felt he could continue in his grandfather's footsteps as a fly tier. Paul specializes in modern streamers and classic Michigan dry flies for bass and trout.
He is an Orvis Fly Designer and ties for many fly shops in the Midwest. His flies have appeared in Fly Fusion Magazine, Tail Magazine and North 40 Fly Shop Emag. He is also the creator of his own line of fly tying dubbing called FrankenDub.