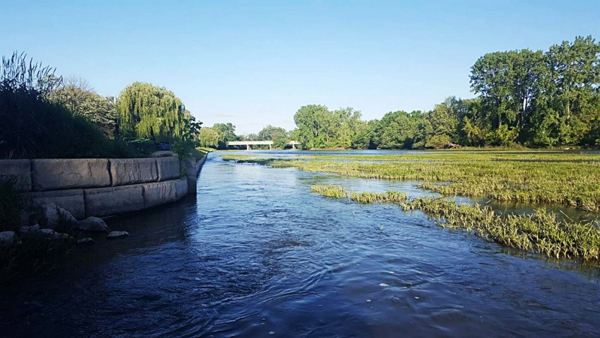 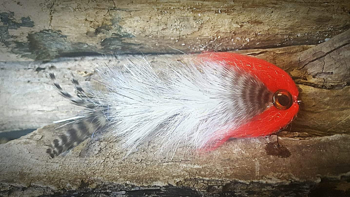 There are few fish that really get your heart pumping like northern pike. They are often the apex predators in their environment and offer great sport on the fly. They will readily take a fly very aggressively and the take is often spectacular. I love to chase these water wolfs and now that Spring is near, the slimy missiles emerging from a deep freeze are baring their teeth. As we all gear up for the warming weather, new patterns start formulating in my head and the need to chuck huge streamers becomes unbearable. Targeting these fish, especially big ones, takes a bit of knowledge on their seasonal movement and habits at different times of the year. Let’s take a look at trigger and reaction patterns, locations, and primary forage imitations.

When I look at designing a pike/predator fly, I want a big profile that garners attention at a distance. A lot of pike patterns can slim down considerable when wet. Patterns like rabbit strip streamers and big deceivers really slim down when wet. Choosing materials that do not slim down easily can create a nice, bulky profile for a fly. Synthetics or hybrid style flies are a better choice than naturals when tying especially large flies. I used to fish a lot of rabbit strip flies, but the flies were heavy and often difficult to cast so it was a tradeoff between that and the nice, undulating movement a rabbit strip has. When setting out to design a new fly I take these three things into consideration: action, profile, and fishability/castability. I also like flies that push a lot of water so I often choose Rainy’s Fish Heads for the heads of big flies. Depth control is also a consideration for pike, especially in the summer months when the pike move to the deeper humps in lakes and rivers to get away from the warm water. They may also find deeper weedy areas to hide in so you have to have your fly hit in the strike zone and get their attention.

To catch fish, you must understand the fish. In the Spring season, pike will start spawning in April and early May. They will find shallow, off-current waters that are filled with vegetation. The fish will spawn over several days and once pike hatch, they already start to become voracious predators. Small pike will eat aquatic insects and eventually minnows and small fish. The time period before they spawn is filled with excitement and awe as these fierce fish unleash on anything that comes near them. This is an ideal time to use large streamers and bigger attention-getting top water flies. Flies like the Top Gun, Frat Boy Shuffle, and the Swinger’s Convention are my favorites for hitting the hot spots that pike congregate. Flies with bigger profiles and commotion producing patterns are a favorite for attracting strikes from even neutral fish at this point in the season. I’ve actually had pike hit some of these flies on the way down after jumping at the propeller blade. 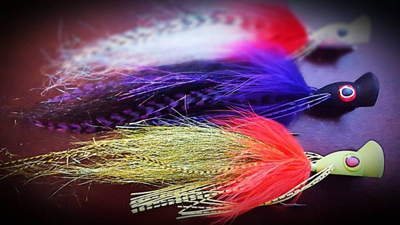 When tying pike flies, everybody seems to have their own favorite materials. I happen to like Rainy’s Craft Fur, Wing-N-Flash, and Fuzzy Fiber. All of these materials are extremely light and easily shed water with your cast. The more natural a material is, the more it will soak up water and become heavy when casted. Rabbit strips are great materials and very durable, but they can become waterlogged and feel like you are casting a wet sock. From a commercial standpoint, sometimes the synthetic materials are a bit cheaper depending on the product so it makes sense to use these materials for financial reasons. Durability is also a factor and synthetics are usually more durable than natural furs and tails with yak being one of the exceptions.

Once you have your materials chosen, the basic shape and form of the fly should be decided and based on the forage or prey material you want to emulate. Pike will eat a multitude of creatures such as perch, suckers, chubs, walleye, bass, baby ducks, leeches, and even other pike. I like to make flies that could imitate many different types of prey at once so a basic baitfish shape usually suffices and then the colors of materials can fill in the rest of the image. I like to have a fly that has a slightly longer tail tied with a material that has good movement.

There are certain colors that work everywhere and there are certainly regional colors that seem to work really well in certain areas. In my pike box, I always have an all-white, red and white, firetiger, black and chartreuse, and orange and black. These colors will catch fish almost anywhere in the country. For the specialty and regional colors, I have a black and purple, all pink with red flash, white with tan, and a chartreuse and pink. When choosing colors I always try to remain as true to the imitation as possible but subtle variations can be effective such as substituting brown for green when tying a perch imitation. Try different colors and don’t be afraid to tie off the wall color combinations because it could be lights out one day when nothing else is working.

From a design perspective, when looking at baitfish patterns for predators the movement has to be right. Pike and Muskies especially like a wide “S” wiggle where the head of the fly has horizontal movement. If you look at any successful predator pattern, it will always have this characteristic. I wanted something that really took that trait and pushed it to the next level. I have been experimenting with different materials for the heads of my flies and they all pretty much produced the same effect. It wasn’t until I took a conehead and reversed it and slid it onto the hook that I figured out a way to make the fly move unlike anything else I had seen. When I stripped the fly, it dove and then veered really violently to the left or right. The fly never really runs the same way on any given pull so the effect of a fleeing baitfish item is enhanced. Inspired by Tommy Lynch’s Drunk and Disorderly fly, I took the mallard flanks and applied them as fins only to the front of the fly. This gave the fly an exaggerated “S” wiggle in addition to the other features. I chose bucktail and ice dub for the body to give the fly some flash and durability. I like tying long saddle hackles on the tail of the fly because the tail can give you some action as well. The longer the saddle hackles are, the more movement you will get so don’t feel like you have to keep them on the short side. Another odd thing that I found with a reversed conehead and spun deer hair is the fly will pause after the initial strip and sits in the water for a bit and then starts to sink so you can control the depth of your fly fairly easily. You can also trim the deer hair head more or less to get a desired depth. 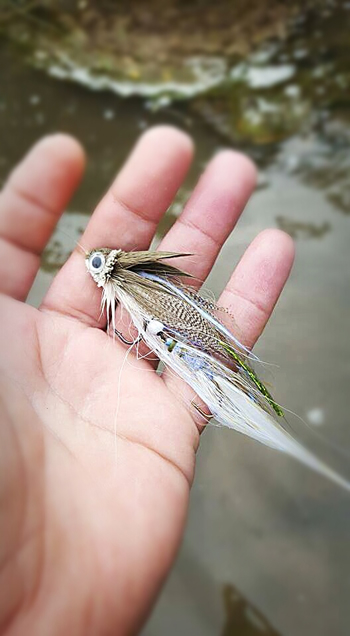 
For the commercial version, I just have two hooks with wire and beads between them but the version I usually use has a shank in the middle. With the rattle and the extra length, a 7 or 8 weight rod is required, the regular version is comfortable thrown with a 6 weight. Try different materials and unorthodox tying methods, you may get some happy accidents that happen as a result of your experimentation. When tying big flies for big fish, try something a little different than the norm. Bigger is better in the spring and the pike are waiting in their lairs for something to swim by. 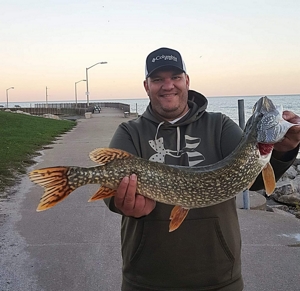 John Satkowski resides in Toledo, Ohio, where he fishes for all fish that swim in the rivers and lakes of southeastern Michigan and northwest Ohio. An artist, fly tying demonstrator, and fly tying instructor, John shares his love of fly tying and fishing as often as he can. For the last fifteen years, he has focused on unlocking the secrets of smallmouth bass, carp, trout, and northern pike on the fly, chasing after them in the rivers and lakes of the Wolverine state and the glory waters of Montana. John’s patterns often use creative fly materials and unconventional tying styles.