PNW Fly Fishing for Steelhead:
The Sexiest Freshwater Fish on the Planet!
by Dick Sagara

It seems that just about every fly fishing publication seduces readers by featuring steelhead fly fishing. Photos of these majestic fish caught in Pacific Northwest rain-forest settings, weave their magic on the minds of anglers. Please keep in mind that as wonderful as steelhead fishing appears, in the Pacific Northwest this is a fragile fishery, fluctuating from year to year, season to season. This year’s summer steelhead fishing in the Columbia Basin is a case in point. Initial projections for Columbia summer steelhead returns were significantly lower than previous years. Thus far in 2017, it appears these projections were correct. Unfortunately, winter steelhead may prove to be just as scarce this coming winter.

Yet, many of us are still drawn to roll the dice and take our chances in enticing this challenging species. Summer Steelhead typically are pursued in the Pacific Northwest streams starting late spring/early summer with angler interest peaking through late summer into late fall. This is a pleasant time to fish and tackle can be matched to coincide with generally favorable water temperatures and fish that will respond to smaller flies fished on relatively light tackle. Keep in mind that variations in water temperature can affect all steelhead angling - high summer water temperatures can make summer steelhead sluggish to respond. As water temperatures cool during the fall, these sluggish fish of summer become increasingly more aggressive to the fly.

Patterns for summer fish vary from the traditional long standing patterns such as the Skunk, Pupil Peril, Max Canyon, etc. to some of the newer cutting edge patterns featured in Rainy’s Steelhead Underground series. This same variation is seen in tackle and techniques. Ardent steelheaders range the gamut from those who will only use two-handed rods and swing their flies, to those who use single-handed rods fishing their flies under Thingamabobbers. There are even those who focus on “skating” flies on floating lines. Seeing a migratory ocean fish explode on a surface “waking” pattern is addictive. I get excited every time I look at beautiful patterns such as Jack Mitchell’s Klickitat Muddler, Finnerty’s Steelhead Skater or Duddles’ Magic Muddler.

Perhaps most interesting is the dramatic increase in the pursuit of Winter Steelhead on the fly. Decades ago, winter steelhead fly fishers were a somewhat rare and odd “breed” on most Pacific Northwest winter streams. I can remember people looking at winter steelhead fly-fishers and telling them that Winter Steelhead could not be caught on fly gear. With the advent of integrated sinking lines, as pioneered by such anglers as Jim Teeny with his T-series lines, this dramatically changed the world of winter steelhead fly fishing. Winter Steelhead could be now be caught on flies using lines of various sink rates to deliver a variety of patterns, ranging from small to large, to fish that were previously thought of as un-catchable on a fly.

Patterns for Winter Steelhead generally are larger than their summer steelhead cousins. Currently, the most popular Winter Steelhead flies are “Intruder” type patterns featuring large profiles and trailer hooks. Patterns from the Rainy’s Steelhead Underground series such as legendary steelhead angler Trey Combs’ new Super Prawns, Bullet Bunnies and Steelflash, along with Jeff Cottrell’s AquaBuddha, The One, The Searcher and Steelie Mikes’ Snot Rocket and Rocket Minnow are exceptional examples of these types of larger patterns that will induce Winter Steelhead to bite. These patterns can also be used on summer fish when a higher profile pattern is what draws the greatest response.

A variation of tackle and techniques also exist for Winter Steelhead fishing with two-handed fishing being the most widely used technique in the Pacific Northwest. This is primarily due to the advantages the longer two-handed rods bring to line control, ability to cover wide expanses of water, and fishing the heavier currents of winter fishing caused by high levels of winter precipitation. Due to cold water temperatures and slow fish metabolism, the term “low and slow” applies to Winter Steelhead fly fishing. Getting the fly close to the fish in a consistently slow rate of speed generally produces the best results.

Persistence and Faith are the key to steelheading with the fly. Keep your confidence up by consistently trying new tackle and techniques and having faith that your efforts will  produce success. In the Pacific Northwest we could not have a better environment in which to practice this persistence and faith. 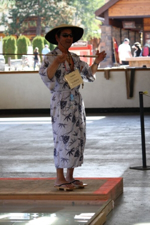 Dick is an "Unique" person who loves all things related to angling, especially to fly fishing - from Tenkara, Tight Line Nymphing, Single-handed and Two-handed steelhead fly fishing, lake fly fishing, and river fly fishing for any species that will give his spirit a tug. He is a manufacturers sales rep in the pacific northwest and rockies.