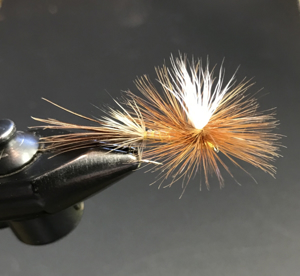 The Brown Drake hatch (Ephemera simulans) kicks off dry fly fishing with large dries to large rising trout. It’s the first of three mayflies (Brown Drakes, Isos, and Hex) that bring fly fishers to Northern Michigan from all over the country. Brown Drakes are large insects that, from head to end of abdomen, will cover the shank of a #6 dry fly hook. The heaviest populations are found in slower sandy/silty stretches. The emergence can begin as early as late May, particularly on the North Branch of Michigan’s AuSable river. A more general emergence date is the first week of June.

While it’s mostly billed as an evening/nighttime event, be aware that Brown Drakes will emerge in fishable numbers during the afternoon on overcast days. Emergence can also overlap with the evening spinner falls, so be ready to switch to an emerger/dun pattern when fish refuse your spinner pattern.

Brown Drake spinner falls can be massive and exciting. This is the main event most fishermen look for with these bugs. Depending on the weather, they may fall several hours before dark, at dusk, or even after dark. It pays to be on the water by 8:00 or so.

While the spinner fall generally offers the best fishing, it can be fickle. Most mayfly spinner falls will happen as long as the air temp doesn’t go below 50. Brown Drakes seem to be a bit more temperature sensitive. Clouds of them will be dancing overhead only to vanish seemingly in an instant; turned off by the air temp. If it goes much below 56/58 degrees, they are likely to vanish. I’ve had this happen numerous times and it is frustrating.

Which flies will you select? As with every other hatch, there are many different Brown Drake patterns to choose from. For the spinner fall, Regan’s Brown Drake spinner is hard to beat. For an emerger/dun pattern, Michigan’s famous Roberts Drake is a favored pattern. Look for both ( or whatever you choose) on a #10 1xl or 2xl hook. A tannish bodied soft hackle on a #8 or #10 wet fly hook works well sub - surface. I’ve found this most effective in day time emergences. For a day time dry fly, I favor a slightly smaller emerger/dun pattern tied on a #12 1xl or 2xl hook.

Anglers should be aware that Brown Drakes are relatively short in duration; at times less than a week on any particular river. Stay in touch with area fly shops; when Brown Drakes start you don’t want to miss this action! 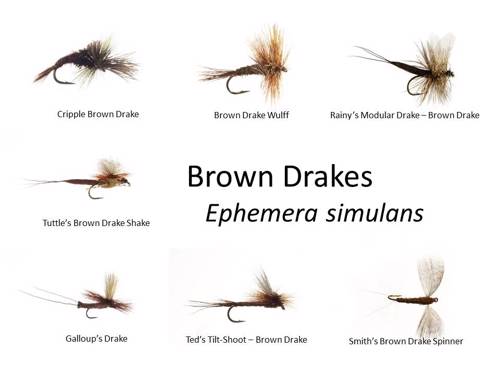 Tim Neal is a Grayling, Mi native who has fished Northern Michigan rivers extensively since 1954 when his Dad got him his first fly rod and showed him how to tie his first fly. Tim started commercial tying in earnest in 1984 and has since produced and sold some 350,000 flies, mostly to Michigan fly shops. He is an professional fly designer and vendor of hooks, hackle, and other tying materials at BestValueFlyTyingHooks&Feather s. His specialty is parachute dries from #4 3xl to #20.