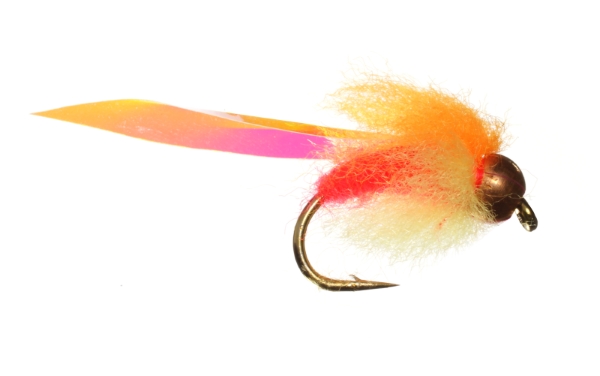 The Samurai Spawn came about by inspiration. It rained extra hard and often in the fall of 2003 and the king salmon of Michigan’s Pere Marquette River were more aggressive to more kinds of salmon flies then normal. It was often hard to decide use the standard egg patterns or flashy streamer patterns. Typically, they both worked. Egg-Sucking Leeches and Flashabou Tails don’t really imitate anything seen in the river but even the normally selective resident brown trout were hitting them.

Regular egg flies were still the favorite but I wanted to soup them up without getting too complicated. Like most fly tyers, I am always looking at random materials to incorporate in my flies. One day while unwrapping a candy bar I was bedazzled by the flash on the inside of the wrapper. Then it hit me: use some wide silver or pearl Mylar to achieve a rhythmic flashing like a spinner blade on an egg pattern. Before long, the Samurai Spawn egg was born and it was deadly that fall on steelhead, browns, and king salmon. It performs well in clear water but in off-colored water its dynamite. It has been in my “tool box” ever since.

The Samurai spawn is the ultimate Clown Egg. It incorporates three different colors of egg yarn and a brass beadhead to get it down where it needs to be. With the added flash of the mylar tag it makes it irresistible to the fish. Comes in sizes 8 and 12.