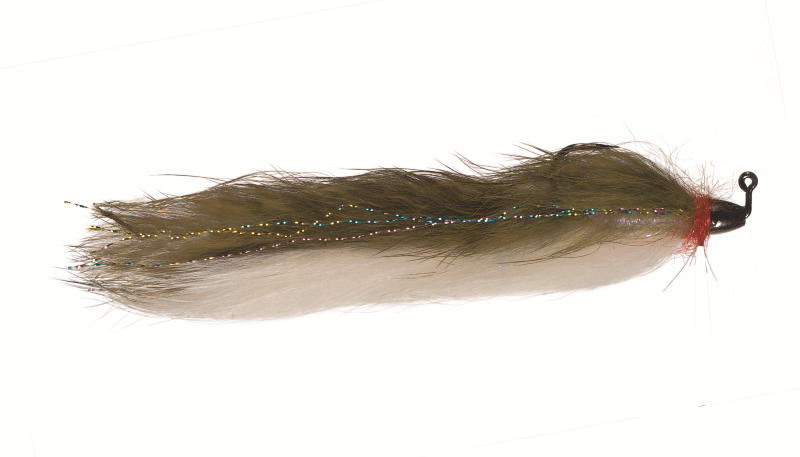 "I designed this fly several years ago after an august guide trip in box canyon on the Henry's fork. Flows were high, and there was a significant amount of river grass along the river bottom. I was guiding a father and son that day, and the grass made deep nymphing difficult. To avoid removing grass from our flies after each drift, I decided to fish with a dry/dropper rig, higher up in the water column. I remember a small rainbow attempting to eat the boys hopper fly, and instinctively, he set the hook. The small rainbow was unable to successfully eat the hopper, but the fish was accidentally hooked in the side by the beadhead dropper. The fish's erratic behavior as it struggled against the fly stuck into its side attracted the attention of a large rainbow which appeared seemingly out of nowhere. From out of the grass the large rainbow attempted to eat the struggling juvenile two or three times before finally disappearing into the grass as quickly as it appeared. A lightbulb went on in my head, and that night after several cold inspirational beers at the TroutHunter bar, I tied the original box canyon double bunny. I chose the jig hook to keep the fly off of the porous lava rock in the box, and the tungsten cone head to give the fly the jigging action of a struggling rainbow. The bunny hair is constantly moving, which brings the fly to life. The olive over white pattern gives the fly the color contrast of being darker on top than on the bottom, and the rainbow crystal flash gives it just the right amount of life-like appeal. "The Box" has a significant population of juvenile rainbows, and the way of the world is that big fish eat little fish. This fly has proven itself time and again and has earned its place in my guide box."

For four years Pat wore a suit and tie, shaved daily, and worked long hours in a tiny, windowless office as an associate attorney. In April 2007, he escaped corporate America, packed his truck and headed West in pursuit of his passion for fly fishing. By August, he was guiding trips for TroutHunter on waters he first fished as a teenager. He is TroutHunter’s busiest guide due to his tireless work ethic, quick smile, endless patience, and an uncanny ability to exceed expectations.