Fishing In The Dark
Brian Kozminski 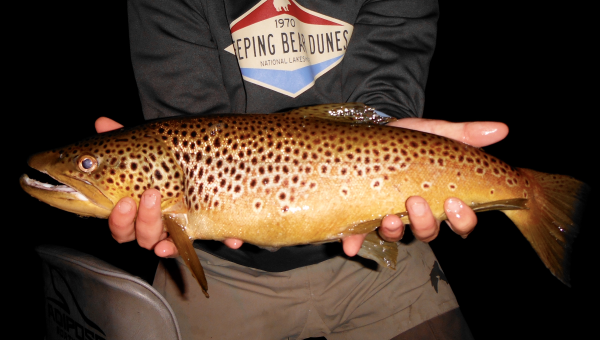 "You mean you float this in the dark?"- "Yes." "You actually cast and catch fish without any lights?" "Often, not all the time, but once you do, you will be forever changed....It is not the delicate soft presentation of a #16 Madame X, actually quite the opposite. We are fishing mice patterns!" This is a Client conversation that has happened on more than one occasion over the years floating some of our heavily wooded northern-Michigan rivers. Yes it's true, we do it in the dark, not entirely true, red or green headlamps are acceptable, and they don't blind the guide/client nor giveaway you presence to any suspecting trout. What does it take to be a good 'Mouser'? Like most fishing, time and patience are critical, but on a totally different level. First, understand your prey. They are large nocturnal predators, specifically built for hunting swimming tenderloins-- whether they be in the form of amphibian, fish or mammal. Brown trout have been found to feed almost exclusively at night and are most active just before dawn. They like to hunt in shallow sandbar regions- think Orca attacking seals near islands, smaller prey can out maneuver predators in open water, but in less than two feet of water, the 24" brown has the upper hand- and nowhere for a likely mouse or frog to escape. So flip the normal methodology of casting at LWD(large woody debris) and cast to the shallow side of the river. Second, patience. No really, A LOT of patience. On very few occasions has an angler actually hooked up on his/her very first mousing 'take'. Many big browns will swipe or slash at the mouse pattern to immobilize or stun the prey and more often than not, client and guide miss or set prematurely because they are all jacked up on coffee and 5 hour energy drinks to make it through the late night/early morning hours. Since your sense of sight is gone, heightened are all your other senses. Hearing & feeling become your primary inputs. When you hear the subtle take from a twenty inch something or the unmistakable ‘toilet bowl flush’ from a cavernous mouth of Hog Johnson, it takes every ounce of restraint not to set the hook and pull the mouse pattern directly out of the trout’s mouth. Waiting patiently, feeling the weight of the fish on the other end of the line, then you really have connection. Now you have your hands full. Next, be sure you are properly prepared and outfitted. Some anglers go big and heavy, that is personal preference and completely acceptable. Fly rods in eight weight are good for pulling a two foot bruiser out of multiple stacked logs or deep mysterious pools, but I prefer a solid 6 or 7 weight. Some of our rivers are so heavily overgrown with cedars that a 8' rod with sold backbone works perfectly. My personal preference is a TFO Mini-Mag for that, but the new AXIOM II is also good. The BVK or Clouser are great options as well. If you have limited access to rods, you will most likely want to use your streamer rig and adapt it to the night game, which really isn't 'that' much different. Your line choice should have an aggressive forward taper, Scientific Angler Frequency Magnum or Mastery Titan will assist in flipping that foam/deer hair/rabbit strip creation will little effort. SA also makes a Frequency GLOW- great for beginners to get an idea where they are casting. Keep your leader short and stiff. While fishing in Arkansas on the White, I learned to never go below #15 fluorocarbon and 6' or shorter. Some will argue to use mono because fluoro will sink, but at less than 7 feet, it won't sink a mouse pattern. Sometimes, we fish double deceivers, or other large baitfish style patterns that push some water, so the fluoro comes in handy. Now, let's talk about flies... You need to make your fly presence known. Seriously SPLAT your water logged drunken lemming pattern on the water, then give it a pause. You want Mr. Salmo trutta (Brown Trout) to hone in on his next meal. You can then begin to proceed with either short little strips with occasional pause, or some anglers like to jiggle/swing the fly across the water with intermittent pauses. After fishing with many different styles, I can't speak to which one is more effective. What works one night on one river may not be the key in your neck of the woods. Have faith in your method and your flies. One of my best clients, who has boated a couple decent trout, watches YouTube videos of mice swimming. Sounds crazy, but it helps him know how to animate his fly. Also, have fun tying your own mouse patterns. Look for buoyant materials that will also hang just a little in the surface film. A few of my personal favorite and successful patterns come from Rainy's. Steeve's Loco Mouse hits the water hard, takes a beating and comes back for more. Be sure to carry a few of the classic MouseRat by Dave Whitlock too. Check out the new Mason's Mouse Trap-- dead, sexy.

The more times you go, the more likely you are to connect. Don't get frustrated if you miss a few times. We have all been there. It's part of the learning curve. Keep it fun. Enjoy the journey!

Brian Kozminski, known as “Koz” by his piscatorial pals, has been playing trout from Michigan waters for over 30 years. Originally from Grand Rapids where the Rogue River and Grand River were his home waters, his frequent trips to Grayling to fish the Holy Waters were not enough. Nearly a decade ago, he and his family made ‘up north’ a permanent way of life. Rooted in Petoskey, the Bear and Maple rivers were his primary destinations. A recent transplant to Boyne City now allows the Jordan and Boyne rivers to become his backyard home waters. He is a lifetime member of Trout Unlimited and ex officio for the Miller VanWinkle Chapter, he shares his passion for the resources by teaching local children the art of fly tying. He also provides a Salmon in the Classroom experience for kids at Sheridan Elementary School in Petoskey. An advocate for catch and release, he is also northern Michigan’s Ambassador for Greenfish, as well as an FFF member. He has been tying flies since his father taught him at the age of nine.