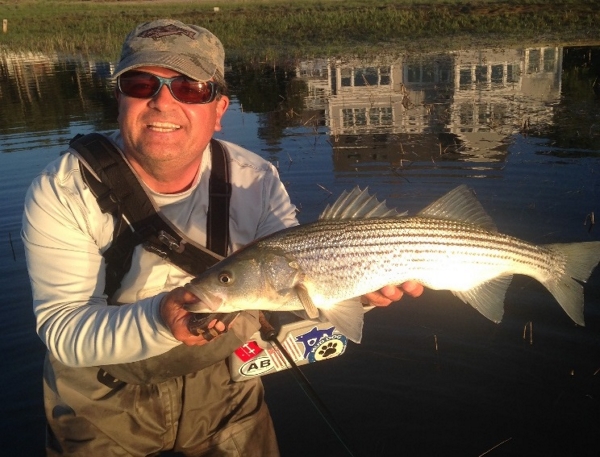 Have you ever wondered where 75% of the fish we catch come from? The estuaries around us contribute an abundance of fish and support a tremendous amount of wildlife. Estuaries are natures nursing grounds and play a huge importance in erosion control, filtration and are home to a wealth of wildlife and plant species. Understanding a little more about estuaries, the baitfish they support, and the time that these baitfish come in and move around and out with the coinciding migratory patterns of the larger fish that feed on these can greatly improve your fishing prowess.

In North America NOAA (National Oceanic and Atmospheric Administration) has controlled and managed 28 estuary reserves to guide the use and protection of ocean and coastal resources. They also do a fair amount of research to help us understand what is going on under the surface and how to be good stewards of this valuable natural resource. Many areas that contain an estuary also have volunteer groups whose members are very knowledgeable about their specific watershed and breeding grounds. 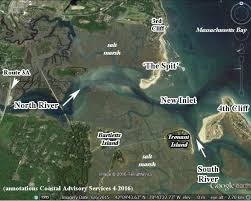 In my home waters south of Boston where I guide and fish, are the North and South rivers. This estuary system encompasses many communities including Scituate, Marshfield, Norwell and Pembroke. The headwaters of the North river are located in Pembroke and the headwaters of the South river are located in Marshfield. Both of these rivers begin at the mouth of the Massachusetts Bay in the towns of Scituate and Marshfield. The North and South River Watershed Association (NWRSA.org) heads the awareness of the resource, counting fish at the ladders and collecting useful data within the estuary. 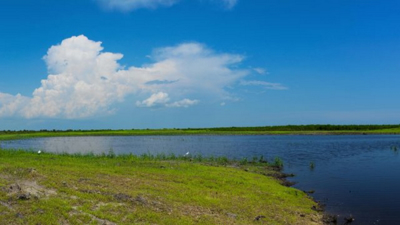 In the spring, the species of migratory fish that come from the ocean and make their way to breed in the fresh water are Blueback Herring, Alewife aka “river herring” and Shad. In Massachusetts waters, alewives spawn in late March to mid-May when water temperature reaches about 51ºF. Blueback herring spawn later in the spring (late April through June), when water temperature reaches about 57ºF. Amongst those arriving species are the striped bass that forage during their migratory trek up stream.

We also have a significant American Eel population; eels are fish, have a lifecycle that begins offshore in the Sargasso Sea, which is southeast of Bermuda where adults spawn. After eggs hatch, young eels called “Leaf fish” drift inland with ocean currents, as they near the eastern coastline they morph into “glass eels” which swim towards streams, rivers and lakes. As they enter into the estuaries, eels are now called “elvers” and turn from clear glass to a brownish tint. As the elvers feed and grow in the rivers, the females tend to go further into the freshwaters while the males maintain a life with-in the brackish waters. This journey may take many years, upon reaching maturity the eels will return to the open waters to spawn. The life cycle of an eel can be upwards of 20 years.

The Atlantic Silverside, another species of baitfish, habitat is generally near the water’s edge. They are found swimming in brackish waters, such as in the mouths of rivers and streams that connect to the ocean. These small schooling fish have been seen to gather in seagrass beds, which can harbor the nearly defenseless fish some form of shelter from predation as well as provide safe haven for spawning. During winter, most Atlantic silversides swim in deeper water to avoid cold/low temperature. During the summer, most are found in the shallows along the shoreline. The Atlantic silverside’s defense is to hide in seagrass beds. They are also quick swimmers and their coloration of silver and a little white makes it confusing to predators to determine the direction the fish are heading. The silverside's strongest form of defense is the strength-in-numbers strategy, where fish will school in large numbers to diminish their chances of being the one picked off by a predator.

The grass shrimp is also a very important part of the estuary habitat. Grass shrimp will spawn during the months of May, which trigger a feeding behavior of the striped bass that already exist from their migratory following the herring.

Estuary fishing in the spring can become very productive. To catch striped bass you must be observant, and know the bait you need to mimic. The above list is just a few of the many species and time frames that need to be considered. Reading the water and understanding the bait that striped bass feed on is vital. Your fly must closely resemblance the bait present in the estuaries to effectively catch Striped Bass in the river systems, but when you get it all dialed in you will have great success and the time of your life with these beautiful fish bending your rod. 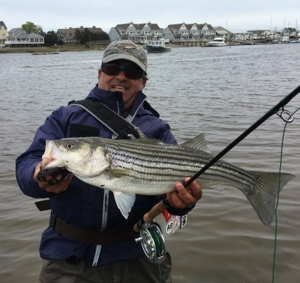 Joe Cordeiro has been tying flies for over 35 years. The past 20 years focusing on guiding, teaching, presenting at shows, and marketing salt water flies. Joe has been fishing his entire life with growing up near Cape Cod. Fly-fishing has been his main focus for many years. His salt-water fly patterns have been tested in waters for their imitation to the bait they mimic. Many of his patterns are lifelike imitations. The materials used are natural and add to the authenticity of the product. Some of his fly designs are commercially produced by Rainy’s Flies (http://www.rainysflies.com/fly-designers/joe-cordeiro ). Joe’s style and tying technique have caught the attention and admiration of many seasoned fly tiers and his passion for the art is evident.